Each week, Sunday School takes a second look at a classic album worth revisiting years after its release. EMMIE staff handpick releases that shaped a genre, defined a generation or deserve recognition despite being left in the distance. Keep up with Sunday School for your weekly dose of dusted-off classics and throwbacks that merit a second spin. 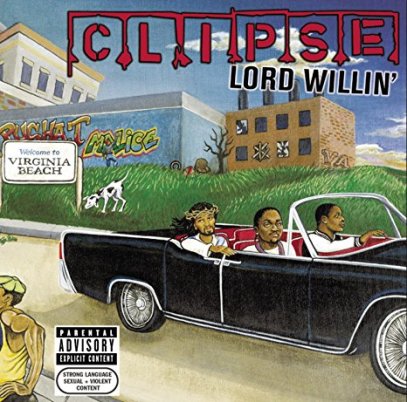 Good For: Clubbin’, inspiring a new wave of underground rap projects, the background music of any dream that you’d think Vince Staples would have had

Being a self-proclaimed Clipse fan, I have done my fair share of ruminating on the Virginia Beach duo’s discography. While there is not much consensus among critics, fans and the group itself, many people associate Clipse’s 2006 release Hell Hath No Fury to be their defining project. However, I have always been more attracted to the group’s debut studio album, Lord Willin’.

Lord Willin’, while technically not being the group’s first project overall – they were slated to release a 68-minute project titled Exclusive Audio Footage in 1999, but their record label at the time, Elektra Records, indefinitely shelved the album – was the start of the group’s rise to prominence. Clipse, comprised of brothers Gene “No Malice” Thornton and Terrence “Pusha T” Thornton, were already lyrical favorites of the locals by the time that they teamed up with other Virginia Beach natives and producers Pharrell Williams and Chad Hugo (better known as The Neptunes) around 1993. Combined with The Neptunes’ funky and cathartic production, the result of this working relationship was the securing of a record deal with Arista Records and the eventual release of Lord Willin’.

If Virginia Beach were to have an anthem project, Lord Willin’ would be just that. The album begins with a furious introduction to the group, painting vivid portraits of cocaine dealing and inner-city workings. On “Virginia,” the two push their hometown’s name onto larger national scenes. Via Complex, Pusha T once said, “’Virginia’ was the ode to Virginia that was never made. A lot of people make records about where they’re from. And to be from N.Y. or L.A. or to be from Atlanta and make a record, a lot of people can relate to it… Virginia wasn’t that well-known of a place.” On the track, the Thornton brothers are at their rapping peaks. In Pusha T’s first verse, he raps, “In my ‘Home Sweet Home’ I keep chrome next to my bones/ Alters my walk to limpin’/ Since I love the feel, I guess I’m passionately pimpin’.” These lines accurately depict, according to Pusha himself, the niche feelings of what it was like to live in Virginia in his heyday.

The three biggest hits from Lord Willin’, “Grindin’,” “When the Last Time” and “Ma, I Don’t Love Her (feat. Faith Evans),” are some of the most well-produced hip-hop tracks of all time. “Grindin’,” Rolling Stones’ 56th ranked song on their “100 Greatest Hip-Hop Songs of All Time” list, is most known for its pounding kicks and bare-bones synth work. “When the Last Time” meshes tight guitars, industrial sounds and a rocking bass line together to create a jumpy bop. “Ma, I Don’t Love Her (feat. Faith Evans),” one of the few songs that divides time between Clipse and another artist, is a great change of pace that supplements the more hard-hitting songs on the project.

Lord Willin’ is one of the greatest rap albums ever released, and it has inspired many East Coast artists. While Pusha T continues to work on his solo career and his new endeavors as G.O.O.D. Music President and Adidas associate and No Malice lives his low-key life, it is unfortunately a shame that Clipse fans have not been able to live in a world where Clipse has had time to comment on today’s dealings in a technologically-advanced society. Nevertheless, Clipse’s mid-2000s discography is certainly enough to be considered as one of the more potent discog’s in rap history.