It was the beginning of my freshman year when I first heard Kamasi Washington’s The Epic. Though I by no means identified as a jazz fan, I was drawn to Washington’s music by his abrasive, poetic work on Kendrick Lamar’s tour-de-force To Pimp a Butterfly. My first listen left me in a state of sonic shock. What did I just listen to? I thought to myself. Going beyond the conventions of jazz, the album was a machination of twists and turns, as chaotic as it was powerful. I was hooked.

Fast-forward to two years later — fresh off the release of his newest EP, Harmony of Difference, Washington’s music is more needed today than ever. His Nov. 8 show at the Majestic was a testament to that.

Throughout the hour-and-a-half set, which covered both The Epic and Harmony of Difference, Washington played with passion and grit. His eyes oftentimes shut in deep concentration. The sold-out crowd ate up every note he played, bobbing their heads and yelling “Thank you!” from the rafters. Not only were his saxophone-playing skills top-notch, but his musicality and bandleader sensibilities were ever-present.

Washington made sure that each member of his band had a voice — a loud one at that. It was often the case that Washington himself stopped playing, turning the attention to a member of his seven-person band. Some pieces saw his keyboardist take the lead, while others saw mind-entrancing riffs from his bassist. Washington even brought out his father, who played with the band for a majority of the show, horns and all.

Perhaps the most poignant moment of the night came from the final song in the set, titled “Truth.” In introducing the song, Washington described the piece as “a metaphor for what happens when we all come together.” The resulting performance was exhilarating in an unexpected, near-chaotic way, as each band member played a different melody throughout. Washington acted as both a bandleader and a bandmate, taking cues from his fellow musicians while leading the pack with his saxophone.

Kamasi Washington is known to explore certain themes in his music and live performances, some of which are more politically and socially driven than others. His show in Madison was no different, with the overarching theme of unity — or, rather, harmony — taking precedence. In both his treatment of his fellow bandmates and the audience, Washington made sure that everyone knew that they belonged in the Majestic that night.

Two years after first getting introduced to Washington’s work, I find myself still asking the question: What did I just listen to? Moments of traditional jazz were intercut with smooth R&B and fast, rhythmic drums. Washington’s sax playing zig-zagged — harsh and punctuated at one moment but smooth and gentle the next. It’s this level of unexpectedness that makes Washington stand out in today’s oftentimes homogenous music landscape. At the core of that unexpected musical style is a fire. You could see that fire — filled with frustration, passion, and love — burn bright in Madison that night. Kamasi Washington has no plans on putting it out anytime soon. 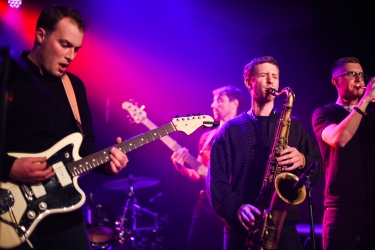